One of my favorite times of each day is my children’s bedtime. I enjoy watching them perform the nightly rituals before bed and then I join them in saying the bedtime Shema prayer. I recently spoke with kindergarten students and their parents at my children’s day school about Jewish bedtime rituals. For the second year, I heard parents tell me about their own enjoyment in tucking their children into bed. It’s a special time for parent-child bonding, so many of them explained. And Judaism recognizes the opportunity for both spirituality and education during these precious few moments before falling fast asleep. 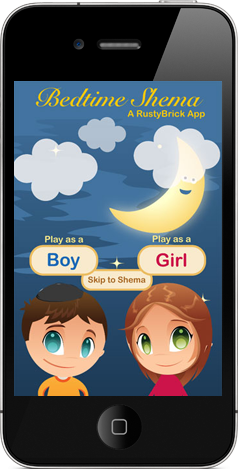 Two brothers immediately thought of this bedtime ritual when looking for a way to memorialize their late mother. In the Jewish community, there’s nothing unusual about individuals dedicating something in a parent’s memory. Some grieving children honor their parents’ memories by dedicating physical objects in a synagogue, sponsoring an event, or even donating the funds for a building or a classroom. But in the digital age, twin brothers Barry and Ronnie Schwartz of Rockland County decided to honor their beloved mother’s memory in a less traditional way.

Adrienne Schwartz’s two sons, who run the Web software company RustyBrick, have released a new mobile app dedicated to their mother of blessed memory. Last winter, their mother died suddenly while in Israel for her grandchild’s bar mitzvah. The two heartbroken men wanted to do something to honor her life, so they did what they do best and developed a mobile app as a living testament to their mother. Mrs. Schwartz took serious the ritual of reciting the bedtime Shema each night.

“Specifically, family always came first for her and we felt it would be a great way for parents and grandparents to spend more time with their children and grandchildren in a special way,” explained Barry Schwartz, the company’s CEO. “We only built the app so that we could dedicate it to her. She was the inspiration for the app.”

The app, named Bedtime Shema, was mostly designed by Ronnie, the founder and chief technology officer of RustyBrick. He wrote the vast majority of the code that runs the app while on his flights to and from Israel to mark the shloshim period (30th day following the death) for their mother. The app seeks to be a fun and interactive learning aid for Jewish children. The Apple operating system (iPhone, iPod Touch and iPad) version was released in December and the Android version went on the market in mid-April – just in time to mark the six month anniversary of Barry and Ronnie’s mother’s death.

The app, which is free, takes the child through the typical bedtime routine ending with the child saying the “Shema” prayer in bed, with a digital device in hand. The prayer is slightly different for boys and girls because of the grammatical difference, but there are settings for both. With so many young children taking their mobile devices into their bedrooms anyway, the Schwartz brothers have delivered a convenient medium to encourage this bedtime ritual.

The start-up title page of the app includes a tasteful footer proclaiming “Dedicated in loving memory of our mother.” It asks if the user wants to play as a boy or girl or skip straight to the Shema. “Play” means following the commands to use the bathroom, brush teeth and shut off the lights using animations that won’t allow the user to advance to the next screen until swiping a toilet handle, moving a toothbrush across teeth or pulling a light switch. After going through the bedtime ritual directions, the child can choose to listen to the Shema or listen to “Hamalach Hagoel,” a soft, beautiful song often recited after the Shema at bedtime each night. Users can even share the app with friends using the most popular social networks.

The Android App in the Google Play store and the Apple app in the App Store can be downloaded by searching “Shema.”