Can a Robot Write a Torah Scroll?

Since 10 July 2014, a KUKA robot has been writing a manuscript of the torah – at the speed of a human scribe – at the Jewish Museum in Berlin.

The KR 16-2 is using a quill pen and ink
The artistic group “robotlab”, that frequently uses industrial robots for performances in public spaces, deals with the relationship between humans and machines. 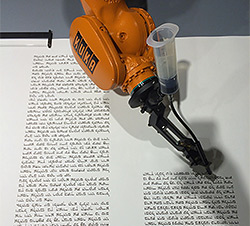 Writing the torah in the same way that a human would, combines centuries of cultural history and traditional techniques with state-of-the-art automation.

The KR 16-2 robot, which is predominantly used in the manufacturing industries due to its versatility and flexibility, is inscribing the 304,805 Hebrew letters on a roll of paper around 80 meters in length.

Equipped with a quill pen and ink, the robot eschews digital printing technology, adopting instead the human mode of writing and producing its manuscript of the torah at the same speed as a human.

The torah is traditionally produced by a specially trained scribe, or “sofer”. This scribe also ensures the requisite holiness of the scripture by devoting himself beforehand to the study of Jewish law and literature.

The robot manuscript, on the other hand, is not kosher and is thus unsuitable for use in synagogue services, as its production does not conform to the requirements of Jewish religious law.

The robot can be seen at the Jewish Museum in Berlin until 11 January 2015.