Is there a better way for a country to encourage Jewish techies to come do business in their country than to offer kosher food? Probably not. And that’s why China has been making a strong push for technology entrepreneurs from Startup Nation to consider coming there to work.

The Times of Israel reports that China is building a community center for Israelis, “complete with a synagogue and kosher restaurant. It will be open in about two years in the Chinese city of Changzhou, located about 100 miles from Shanghai. Speaking at an event in Tel Aviv last week, Stone Shi, deputy administrator of Changzhou’s Wujin Hi-tech industrial zone, said that within five years he expects between 50 and 100 Israeli companies to have operations in the area.” 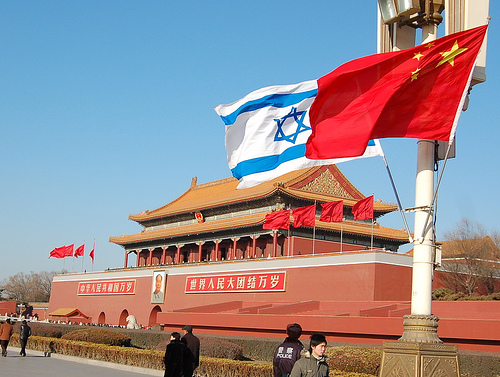 “We are very appreciative that so many Israeli companies are choosing the Wujin Economic Zone (WEZ) for their China operations,” said Stone at an event sponsored by the Cukierman & Co. Investment House. “We want Israelis to feel comfortable doing business in our region, and the new center, 25,000 square meters large, will provide them with an opportunity to enjoy Israeli culture, both secular and religious, and will even offer kosher food — Chinese style, of course,” said Stone. The WEZ is picking up the tab for construction of the center, he added.

Changzhou, located about 100 miles from Shanghai in the southern Yangtse River Delta, has promoted itself as a high-tech industrial zone for the past several years. In 2006, the city was named a national high-tech district by Beijing, making it eligible for government investment and giving special break to companies that set up shop there. And the strategy has worked. More than 1,300 foreign companies, including dozens of Fortune 500 companies, have facilities there, as do over 5,000 local enterprises, many of them partners with American and European companies.

Even so, said Stone, Changzhou sees Israel as a preferred partner to do business with. Despite the fact that corporate giants such as Samsung, Sony and Toshiba have large plants there, “most of the work provided by these companies is lower-level assembly work. As workers’ wages rise, there will come a point where these companies will find manpower too expensive. We have to prepare for a future in which we are able to develop our own high-tech industry, using our home-grown talent,” Stone said. Israelis, known for their “start-up spirit,” can be very helpful in that development, he added.

The first Israeli company to “discover” Changzhou was LycoRed, an Israeli maker of dietary supplements and nutritional products. The firm is now a part of Adama, formerly Makhteshim Agan, which ChemChina bought a controlling interest in two years ago. “Nearly all of our production is for export,” Shay Givon, CFO of LycoRed, said at the Tel Aviv event. “We opened up a small facility in China to serve our customers in the Far East, who wanted products sourced closer to home, and we eventually expanded.” LycoRed built up its local business in the vast Chinese market, and sales in China make up a large portion of LycoRed’s annual $100 million in sales. Givon was introduced to Changzhou by Zvi Shalgo, chairman of the PTL Group and chairman of the Israeli Chamber of Commerce in Shanghai.

Changzhou turned out to be the right place for LycoRed, Givon said. “In order to meet demand for our products in China, we needed to expand our plant. We met with representatives of at least ten cities, but Stone was the only one who came through for us — and the new plant got built within four months.” That was quite an accomplishment, said Givon, given China’s notorious bureaucracy, especially when it comes to projects by foreign companies. “In China you need friends, and we feel we have them in Changzhou.”