Well, if people are curious about which celebrities are Jewish and which aren’t… There’s an app for that. But not in France anymore. 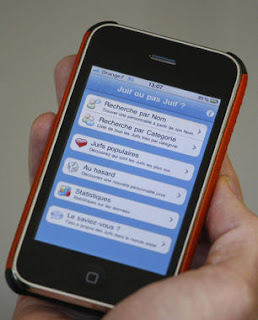 The French version of the “Jew or Not Jew” app, called “Juif ou pas Juif?” in French, was selling for 0.79 euro cents ($1.08) in France when Apple decided to kill it. An organization in France called SOS Racisme argued that the app, which was designed by a Jewish man, violated French laws banning the compiling of people’s personal details without their consent. Apple agreed. The app still sells outside France, including in Apple’s U.S. App Store where its price is $1.99.

SOS Racisme released a statement explaining that it called on Apple to remove the app from its online store and to be more vigilant about the applications it sells. In an interview, published Wednesday in Le Parisien newspaper, the “Jew or Not Jew?” app developer Johann Levy said he developed the app to be “recreational.”

“I’m not a spokesman for all Jews, but as a Jew myself I know that in our community we often ask whether a such-and-such celebrity is Jewish or not,” Levy, a 35-year-old Franco-British engineer of Jewish origin said. “For me, there’s nothing pejorative about saying that someone is Jewish or not. On the contrary, it’s about being proud.” Levy said he compiled information about famous people around the world from various online sources.