Eternal Life For Sale On eBay?

Those who read Milton Steinberg’s novel “As a Driven Leaf” will remember that eternal life is a reward given for the fulfillment of two mitzvot (commandments), namely the honoring of one’s parents and the mitzvah to shoo away the mother bird from the nest before taking her eggs. However, yesterday those who wanted to taste eternal life could have simply logged into the auction website eBay and bid on heaven. 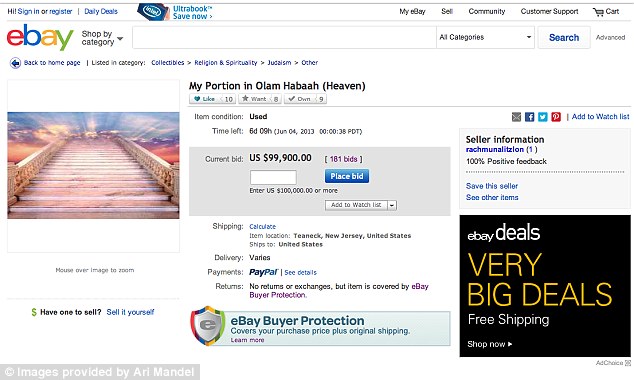 Ari Mandel of Teaneck, New Jersey listed his place in The World To Come on eBay for a mere 99 cents. Titled “My Portion in Olam Habaah (Heaven)”, Mandel says he did it as a joke and didn’t expect that bidders would bid it up to $100,000.

Since the auction “item” violated eBay’s terms of service, it was quickly taken down from the website. Mandel told the Jewish Daily Forward that “it was a joke that ran away from me … when it reached $100,000 I didn’t really expect to get that money. It was nice to fantasize, but I didn’t think it was going to happen.”

Mandel, 31, included several references to the Jewish concept of Olam Habah (the World to Come) and used common Yiddish phrases in his auction listing. He claims to have simply done this as a joke and tells those who took it seriously or were offended by his harmless prank to “chill out.”

The Forward reports that Mandel was raised in an ultra-Orthodox community in upstate New York, but left the community about seven years ago. He is now a divorced father of one child and a student who works as a part-time translator. For those who held out hope that they could really get a spot in heaven by a simple click of a computer mouse button and a six-figure payment, keep hoping. You’ll have to go back to honoring your parents and shooing away mother birds.