Social media changes the zeitgeist in ways we couldn’t have imagined. As we saw with the recent presidential election, opinions and attacks now travel at the speed of light. And so it should be no surprise that the ongoing Middle East conflict in Gaza between the Palestinians and Israelis has escalated into a Cyber war.

While the conflict may seem like history repeating itself, social media is actually changing the way the public sees the violence. As several news agencies have reported,Israel is now using social networking sites like Twitter, Facebook, Flickr and YouTube to its advantage in its war with Hamas in Gaza. In the past Israel has had to rely upon mainstream news agencies to report on the back-and-forth actions in Gaza, but now the Israeli military and government can take its message straight to the people using its social networks.

As the LA Times reported today:

While Israel launched its surprise attack Wednesday on Gaza, it declared it to the world on Twitter, arguing its case for the new campaign against Hamas in less than 140 characters.

Minute by minute, the Israel Defense Forces fed followers information and arguments on the strike. At their computers, Internet users could click through aerial photos, check updates on the offensive and watch a YouTube video of the strike killing the Hamas military chief.

At one point, the Israeli military traded Twitter barbs with Hamas. “We recommend that no Hamas operatives, whether low level or senior leaders, show their faces above ground in the days ahead,” the @IDFSpokesperson account tweeted Wednesday.

The Hamas military wing tweeted back, “Our blessed hands will reach your leaders and soldiers wherever they are (You Opened Hell Gates on Yourselves).” 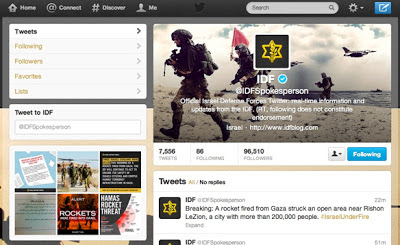 Social media isn’t new to the IDF, but the way it’s now using such sites as Twitter is new and will likely become the way nation-states will operate in military conflicts. It is clear that the chief spokesman of the IDF, Yoav Mordechai, believes that tweeting the operation in Gaza is a good weapon in its hasbara (public relations) struggle. Israel has always been challenged by negative PR in the mainstream media. Mordechai’s office even used Twitter to send a warning to its Hamas enemies, tweeting, “We recommend that no Hamas operatives, whether low level or senior leaders, show their faces above ground in the days ahead.” The IDF’s Twitter feed has been continually updated with news, pictures and videos from the front lines using the Twitter “hashtag” #PillarOfDefense. Perhaps the Cyber war really became a reality when Hamas’ military wing responded with return fire on Twitter, tweeting back, “You Opened Hell Gates on Yourselves.”

In addition to the IDF’s new found use of Twitter, sites like YouTube (operated by Google) have had to navigate their way through the new murky waters of whether the postings by the IDF of their military operations are deemed “kosher” according to its own terms of service agreement. Originally Google yanked a video posted by the Israeli military Wednesday, which showed the “pinpoint strike” that killed Hamas military leader Ahmed Jabari in his car. YouTube originally had a message on the removed video stating, “This clip has been removed because its content violated YouTube’s Terms of Service. Sorry about that.”

However, YouTube apparently changed its corporate mind and allowed the video to be shown. A company spokesperson explained, “With the massive volume of videos on our site, sometimes we make the wrong call. When it’s brought to our attention that a video has been removed mistakenly, we act quickly to reinstate it.” Most likely enough anti-Israel YouTube users had flagged the video triggering a review process until someone at YouTube could view the video in question and make the decision. By reinstating the video, YouTube opened up a whole new front in this war. 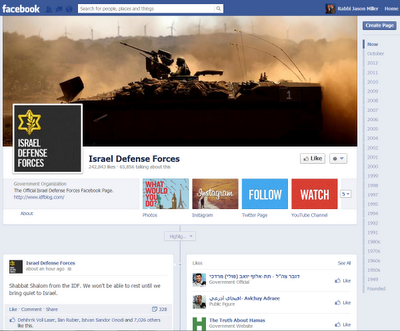 In a statement, the hackers stated, “We will do everything in our power to hinder the evil forces of the IDF arrayed against you. We will use all our resources to make certain you stay connected to the Internet and remain able to transmit your experiences to the world.” Already the hacker group has claimed to have taken down Israeli’s “top security and surveillance website.” They also released a “care package” with tools for staying online if the Israeli government cuts off Internet access in Gaza. Another hacker group called Telecomix posted a message online with instructions on how to use dial-up Internet to stay connect if the Web is shut down. According to Forbes.com, most of the Anonymous’ target websites were still online.

Another new front of the Middle East war in Gaza has been the public discourse on social networking sites. As soon as the conflict escalated advocates on both sides of the conflict began using Facebook to show their support. Pro-Israel supporters began simply updating their Facebook status with the Hebrew words עם ישראל חי (Am Yisra’el Chai) meaning “The nation of Israel lives.” Other Facebook and Twitter users reposted news reports of the direct hit on the Gaza leader and reminded their followers that the news coverage of the conflict has not accurate covered the escalation as thousands of missiles had already been fired into Israel from Gaza. Yesterday, in a show of support many users on Facebook began posting photos of IDF soldiers from visits to the Jewish homeland.

On Twitter, #Gaza and #Jerusalem have been trending off and on over the past few days and many heated back-and-forth conversations have taken place on the site. The IDF’s Flickr site has also seen a huge uptick in traffic with many users re-posting photos from that stream to their own Pinterest boards. Additionally, the IDF’s Facebook page has noticed a sharp increase in fans approaching a quarter million. The IDF page’s recent status was “Shabbat Shalom from the IDF. We won’t be able to rest until we bring quiet to Israel.”

The long-simmering conflict between the Israelis and Palestinians will be the first test of the social media zeitgeist. Newspapers and television news outlets are still relevant, but this will go down as the first war that was also played out in real time on the Web. In the social media era, anyone and everyone can become a reporter. And the millions of vehement opinions will likely only raise the heat of this escalating conflict.