Zuckerberg, now 26-years-old, created Facebook in his Harvard dorm room as a way to connect co-eds in the Ivy League. Today, it’s used by all ages across the globe to divulge more personal information than anyone had originally planned.

Zuckerberg’s first privacy controversy came on November 6, 2007 when he announced a new social advertising system at an event in LA called Facebook Beacon. The application enabled users to share information with their Facebook “friends” based on their browsing activities on other sites. Beacon came under attack from both privacy groups and individuals with Zuckerberg ultimately taking responsibility and offering an easier way for users to opt out of the service.

Emily Gould, author of “And the Heart Says Whatever,” has also been affected by the sharing of private information on the Web. She writes in the current issue of Newsweek: “I should have known that the blog, an anonymous diary of my personal life, was a bad idea. As a reporter for the gossip site Gawker, I spent my days deconstructing similar attempts at concealment. But I lulled myself into a false sense of security. 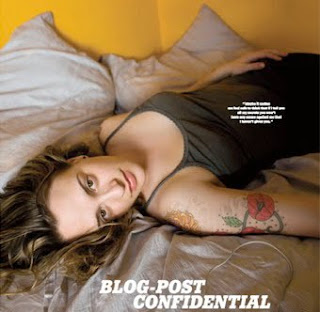 Blogger Emily Gould has been affected by the sharing of private information on the Web.

Disclosing her personal information and experiences with everything from cooking to an office romance gone bad, robbed Gould of her private life. Everything quickly became public and spread around Cyberspace. Her former boyfriend revealed secrets of their relationship in a tell-all article in the New York Post Sunday magazine.

And that brings us to Rabbeinu Gershom. Centuries before the invention of e-mail and status updates, this sage understood a thing or two about privacy. At the beginning of the eleventh century, the leading German rabbi was Gershom, known by German Jewry as Rabbenu (our Rabbi) Gershom. According to the tradition, he wrote four special ordinances (takkanot) which differed with Jewish law in Babylonia.

While his most famous decree concerned the outlaw of polygamy, Rabbeinu Gershom also made it a major sin to open and read someone else’s mail. This legal ruling ensured the privacy and safety of mercantile transactions between Jewish communities.

This sort of makes us wonder what Rabbeinu Gershom would make of the voluntary sharing of personal material on the Web today. Perhaps, someone should share Rabbeinu Gershom’s teaching with Mark Zuckerberg so his company locks down users’ personal information that should be kept private.