It’s no secret that Israel is the Silicon Valley of the Middle East. With thousands of tech companies and start-ups, Israel has become just as well-known as a center for technology innovation as it is for hummus.

Between two visits to Israel earlier this year, I made my annual pilgrimage to the Holy Land for techies – International CES (Consumer Electronics Show) in Las Vegas. Before heading out to the annual convention for “everything technology” I spent some time looking at the Israeli startups that would be exhibiting at the show. One particular company caught my eye, or rather my ear.

Like me, you have probably never heard of Israeli tech company Silentium before. But that will soon change. This company aims to fix something that many people didn’t even realize was a problem. Background noise. We often find ourselves talking loudly to someone standing right in front of us because we have become so used to the background noises of machines and electronics. We live in a very noisy world with a lot of noise pollution, but we’ve become accustomed to these hums and hisses.

When we think we’re enjoying a moment of silence, we are actually listening to the constant noise of computers and fluorescent lights, HVAC systems and noisy cars outside. I was intrigued reading about Silentium’s solution to significantly reduce these annoying noises in the environment by producing an opposing signal at the same amplitude, but with the opposite plan as the intrusive noise.

Yossi Barath, the serial entrepreneur from Herzeliya who founded Silentium, is determined to remove the noise pollution so we can enjoy the sounds we want to hear – a friend’s voice, a concert, or a movie. Noise pollution includes the background noise that is difficult to avoid on loud airplane rides and on long drives along the highway. 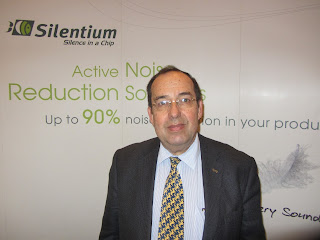 I arrived at Eureka Park, an area at International CES of more than 140 start-ups, emerging companies, and entrepreneurs, and meet Barath and two members of his team who were eager to demonstrate Silentium’s Quiet Bubble.

They had me sit in a comfortable leather prototype chair that had the Quiet Bubble technology built into the headrest of the chair. At first I heard the loud noises of the crowd walking and talking around the cavernous hall like being at a crowded sporting event. And then with the push of a button the turned on Quiet Bubble and I heard nothing – complete silence. It was amazing how all that noise was immediately erased.

“Silentium’s unique, cutting-edge noise reduction solutions,” Barath explained, “deliver ‘Silence in a Chip’ that is embedded by product developers and manufacturers and enable them to offer superior silent products and to create ‘Zones of Quiet’ for consumers.” Rather than having to wear noise cancellation headphones on a long flight, Silentium’s active noise control solutions work without headphones. Their chips can be placed in the headrests of airplanes – they’re currently in talks with Boeing – so that the background noise is cancelled during the duration of the flight and your headphones only need to be used for listening to music or watching a movie. He certainly had my attention since having to sleep with my noise cancellation headphones on during long flights is a pet peeve.

The technology that Silentium has created is not limited to airplanes. It can also be used to remove the noise pollution in offices where loud computer servers are running all day, and to cancel out the noise from HVAC systems, transportation, medical equipment and noisy household appliances like washers and dryers. 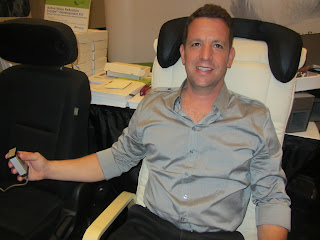 As I talked with Barath, he explained that his goal is simply to improve people’s quality of life. “We develop technology that allows manufacturers to introduce premium products and to elevate the ‘Consumer Experience,’ while eliminating the stress, discomfort and health problems associated with exposure to noise.” Their technology reduces disturbing noise in the environment by capturing it and canceling it out to ensure what Barath refers to as “Zones of Quiet” around an individual.

Silentium collaborates with companies to figure out how to use their technology to improve their own products. They also teach companies how to utilize this unique technology. While they don’t sell their product directly to consumers, we may have the opportunity to experience the Quiet Bubble soon as this technology will become a feature in new cars.

With all of the great technology of the 20th and 21st centuries has come a lot of unwanted noise. Sound can be a great thing that we should appreciate – like when we’re watching a high definition movie with crystal clear theater quality surround sound. But we don’t want our ears to pick up the constant noise of the Blu-Ray player, the air conditioning and the lights in the ceiling too. This technology, another example of impressive Israeli innovation, allows us to silence the noises we don’t want and to focus our ears on the quality sounds we do want.

Silence is golden and Yossi Barath and his team at Silentium are committed to helping us achieve it.