The Shivah Video Game is Back

“Russell Stone is a rabbi at a poor synagogue in New York City. He is a devout man with a problem. Membership is way down and he lacks the funds to keep his synagogue open. Things are looking very bleak, and he has grown progressively more cynical and bitter with the passage of time. Just as he is on the verge of packing it all in, he receives some interesting news. A former member of his congregation has died and left the rabbi a significant amount of money. A blessing? Or the start of something far more sinister? Can Rabbi Stone just accept the money and move on? His conscience says no. Step into his shoes as he travels all over Manhattan in his attempt to uncover the truth.”

That might sound like a synopsis you’d read on the inside book jacket of a Jewish-themed mystery novel. But it’s not. It is actually the premise for a video game called “The Shivah: Kosher Edition.” The award-winning game has been around since 2006, but at the end of November, the Brooklyn-based company that created it launched a new version for the Apple App Store.

The revised version, which is completely remastered, has updated graphics and newly composed music and a choice of three different endings. The app sells for $1.99 and is considered a third-person point-and-click adventure game. Players try to solve mysteries in many games, but The Shivah is the only one that focuses on a rabbi and Jewish themes. 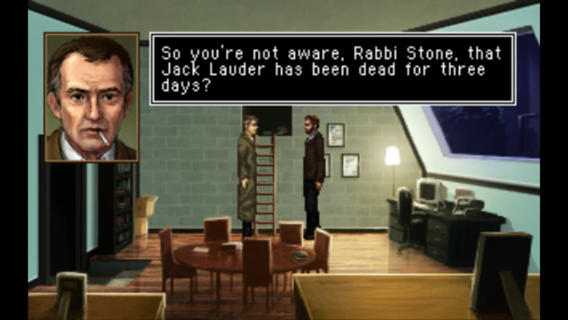 The player assumes the role of Rabbi Russell Stone, a hard-hearted man who is struggling with his faith. He is visited by the police and informed that a former member of his dilapidated New York synagogue, Jack Lauder, has been murdered. Stone and Lauder had an acrimonious falling out and Stone drove Lauder from his flock, and as such is puzzled to learn that Lauder has bequeathed him a large sum of money. The police are suspicious as to Stone’s possible role in Lauder’s death, and Stone himself is curious, and as such he sets out to investigate the murder himself and clear his name. Stone begins by paying a shivah visit to the widow of the murdered man, then tracks down a dangerous criminal named Joe Demarco who he suspects may be the killer. His investigation takes him to a large, wealthy synagogue, where he discovers that the corrupt rabbi who runs it, Zelig, is in league with organised crime.

Back in 2006, when the original version of The Shivah was released, FaithGames, a blog that reviews video games with a faith-based theme, stated that it is “Not only an excellent indie adventure game, but also one of the best examples of portraying faith through a game that I’ve ever seen.” 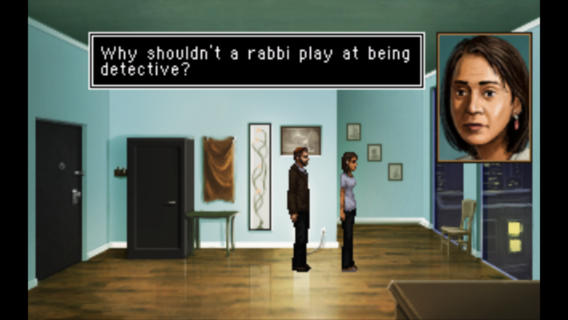 I’m sure I’m not the only parent who will do a double take when I hear my kids grabbing for their iPhone or iPod Touch and yelling, “C’mon, let’s go play some more Shivah!”