Unplugging from Technology and Electronics at Summer Camp

Back to the Future: An Update on “Unplugging” at Camp

What happens when a camp dutifully drafts and implements an electronics policy? (read the blog explaining the new policy here) For starters, it brings back phenomenal memories of days gone by. As a camper in the 70s, I spent a significant amount of time in my cabin writing letters (the only mode of communications and one I took very seriously), catching up with bunkmates and perhaps most importantly continuing the previous day’s jacks game that I was forced to abandon when the lights went out the night before. My friends and I would literally spend hours on the floor tossing up our super balls (we never used the rubber ball that came with our jacks), and devising harder and harder feats. Not everybody was a natural jacks player so others played cards or observed the competition. In short, a large part of our summers revolved around these games. 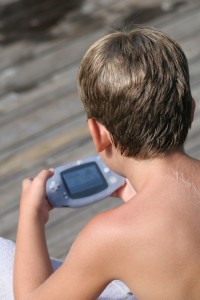 Walk into a 21st century summer cabin that has electricity and the first thing you’ll notice is that all of the outlets are “occupied” by chargers. Chargers to ipads, commuters, MP3s, gameboys, gamegirls, etc., etc. The only camper on the floor was the one looking for something he or she dropped. Cabin time and rest periods had become solitary endeavors (OK, so perhaps some campers were actually getting rest), where almost everyone was plugged in and largely tuned out. This was not the environment we were attempting to create.

Camp is all about unplugging and learning how to connect to both one another and the larger environment, and electronics in general did not facilitate this goal. Moreover, not everyone had the same devises so before you knew it an unnatural, unhealthy and unplanned competition was in full force in many of the bunks. The only way we knew how to deal with this was to in earnest, get serious about an electronics policy. The policy was unanimously backed by the staff, the camp committee and practically all of our campers’ parents. In fact, parents are the ones who argued most vehemently for the change. So, we were ready to have our first summers sans game boys, cell phones and computers. There was however one major concern: What would the campers do without their electronic games? In a moment of genius, the directors of the camp suggested outfitting each of the cabins with old-fashioned games: Jacks, cards, checkers and board games. What a better way to engage campers during quiet periods than a game of jacks or Yahtzee. Problem two: many of our counselors didn’t know how to play many these games. Solution – during staff training this year, over 150 of our soon to be counselors learned the intricacies of “foursies” and “dumps” (jacks terms) as well as what a pixie stick was (no, not the candy) and how an entire bunk can be captivated while one tries to carefully remove a Jenga block without the tower crashing down.

Walk into any cabin at GFC and it’s a scene from Back to Future: campers have taken to the games like fish in water. There is laughter, healthy competition, camaraderie and good old fashioned fun. So, was leaving one’s game boy at home painful? Perhaps initially, your sons and daughters couldn’t imagine a moment, let alone 3 weeks without their electronics (by the way, campers could have MP3 players to listen to music but none they could watch movies or play games on) games, but from what I heard, it was a welcome reprieve.

Rebecca Lunstroth is a member of the Greene Family Camp Camp Comittee. Rebecca has two children who are former campers. Jack, her youngest, is currently in Israel on the NFTY in Israel trip with the group from GFC (Garine Greene)