I encountered Lost Tribe Esports at the 2019 JCC Maccabi Games at Jewish Community Center of Metro Detroit in West Bloomfield. Situated in the Teen Center of the JCC (which was the Holocaust Memorial Museum when I was a teen), I found dozens of Jewish teens playing video games. At first, I was a little taken aback since the Maccabi Games are a sporting event (sort of like the Jewish Olympics for teenagers around the globe). I didn’t know what to think since the weather was beautiful outside and these teens were sitting in a dark, air-conditioned room staring at screens and playing video games. However, the kids looked happy and content (plus, these were the same kids who were spending most of their days playing baseball, basketball, soccer, tennis and a dozen other competitive sports outdoors all week). 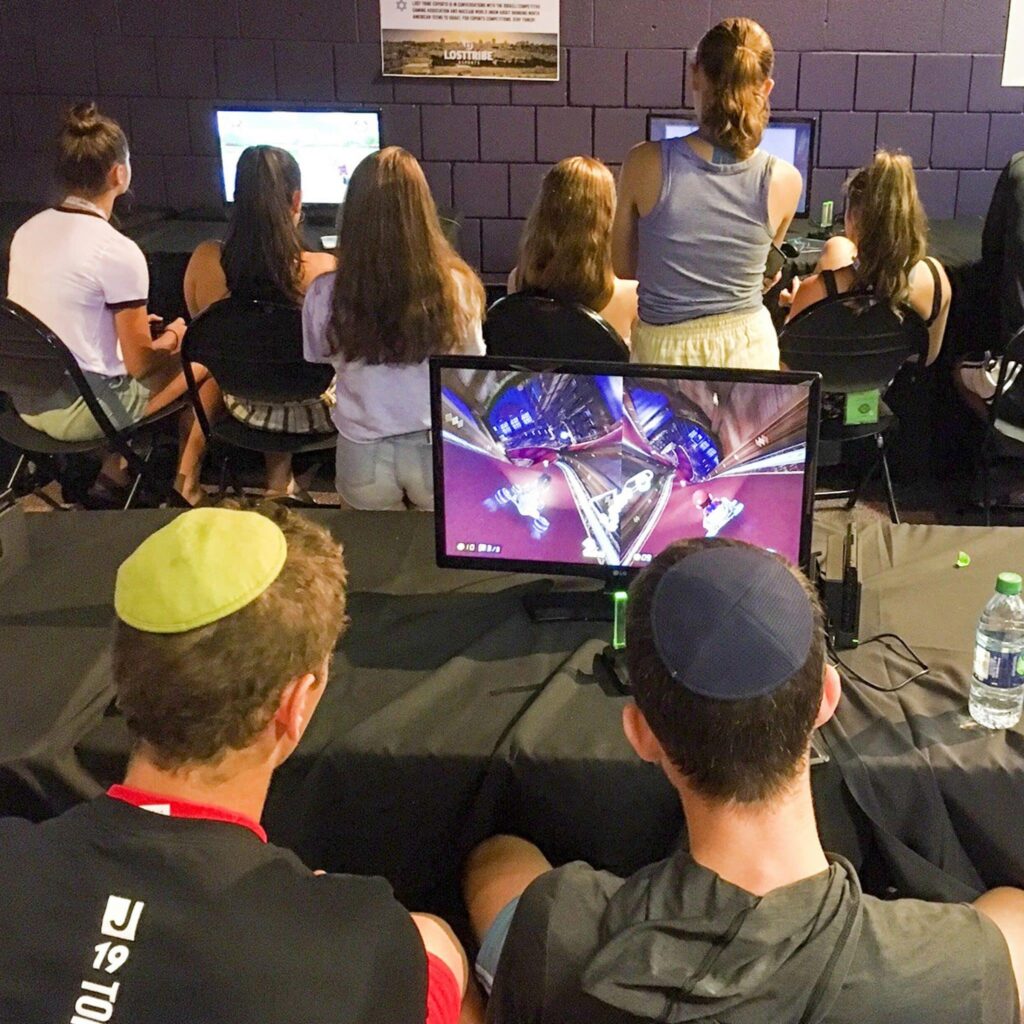 The JTA recently covered Lost Tribe Esports in this article:

One day last year, when she was on a break from playing basketball at a Jewish community center, Sara Levenson came upon a room full of people playing video games.

She joined in on a lark and soon found herself drawn into a game called Rocket League, a video game, or “esport,” where cars play soccer against each other, occasionally colliding. Like most members of Gen Z, Sara, 14, has been playing esports for years, first on her older brother’s Xbox console, then on her own. She also plays the popular shooting game Fortnite on her computer.

A few months ago, with most in-person basketball (and other sports) on hold due to the pandemic, Sara started playing in a Jewish video game league called Lost Tribe Esports and recently found herself going deep in a Rocket League tournament on a team with a friend she’s met only virtually — in fact, through playing Rocket League against him.

“It’s really interesting how far esports have come, and how some people see it as kind of equal to physical sports now, and just the level of competitiveness,” she said, counting herself among those who see esports and traditional sports as equivalent.

Sara is one of the thousands of Jewish teens who have played esports with Lost Tribe, which has garnered a lot of interest since the onset of the COVID-19 pandemic, as Jewish camps, teen trips and youth group programs were cancelled this year and more people have stayed inside. Some 4,000 kids have played in its tournaments since the start of the pandemic.

The league was founded in 2018 by Lenny Silberman, a former Jewish camp director and the former director in North America for the JCC Maccabi Games, an international Jewish athletic tournament. Just as Jewish organizations have long used sports to connect Jewish kids, Silberman says Lost Tribe hopes to do the same thing with video gaming, which is now usually known as just “gaming.”

Sara’s experience appears to be a case in point: She said she’s drawn to Lost Tribe for the gaming and the ability to meet friends — not necessarily due to anything explicitly Jewish. But she added that, as a girl in a space thought to be dominated by men, she appreciates the league’s focus on safety in online spaces, something Silberman said is informed by its Jewish values.

“There’s definitely a lot of girls in esports, but I think a lot of them are too scared to show up because there’s a toxic community that’s been formed — that esports is just for guys and meant for them,” Sara said. “So I think Lost Tribe is really just a safe space to get more girls to do it.”

Lost Tribe’s tournaments are restricted to kids who are ages 13 to 17 and who register in advance. Lost Tribe has policies to ensure adults don’t get into the teen space and monitors communications so employees can spot and prevent abusive language or conduct.

“As long as I’ve been around, there hasn’t been anything super hateful or anything like that,” said Jake Offenheim, Lost Tribe’s gaming and program associate, who loves gaming and turned down a spot at law school for the job. “It’s a pretty loving and strong community in comparison to a lot of other gamer cultures, I think because of the Judaism aspect, we all have a united thing, other than gaming.”

Those privacy policies, plus the influence of gaming culture, mean that Offenheim doesn’t know the kids’ names even as he gets to know them online.

“Internally we have registration with the real names,” he said. “But I’ll refer to them as ‘Fortify’ or ‘David Potato.’”

There appears to be a lot of room for additional growth. Research from YPulse, a marketing firm that focuses on Millennials and Generation Z (which began in the late 90s), found last year that three-quarters of Gen Zers play video games once a week. Despite the image of gaming as a mostly-male phenomenon, YPulse found that 60% of Gen Z women also like to game. Another study by Morning Consult found that 41% of Gen Z men use Twitch, a video game streaming site.

Lost Tribe streams parts of its tournaments on Twitch. Offenheim calls plays in the games, like a sports announcer, with another employee, and the language can be hard to follow for people who are unfamiliar with gaming.

“Dark with the demo! Going for the squad wipe!” one of them exclaims during a recent Rocket League match, as two of the players crash into each other.

“Unfortunately this isn’t a Fortnite tournament,” the other commentator says.

“Yeah, you do not get points for elims,” the first one says.

(For the record, the commentators are referring to demolitions, when one car destroys another by crashing into it; squad wipes, when one team destroys both of the other team’s cars; and elims, or eliminations, which are valuable in Fortnite, the shooting game.)

Lost Tribe is also trying to inject some explicitly Jewish content into its programming. One recent Instagram post features a meme with a turbocharged car carrying an Israeli flag, and reads “Shabbat shalom from Lost Tribe Esports.” The league hopes to bring American teens to Israel for an esports tournament once such trips become possible again.

But the idea is for Judaism to be a subtle addition to the games, not the focus — get Jewish kids in the same (virtual) space, and use that as a gateway to more substantive Jewish experiences.

“I don’t want to go in there and bonk anyone over the head with my degree from JTS,” said Sarah Beth Berman, Lost Tribe’s director of Jewish content and education, referring to the Jewish Theological Seminary. “Make it cool, make it fun, make it competitive and bring in the Jewish.”