Now in its seventh year, Birthright Excel helps create a network of young Jewish business leaders around the world while also introducing future entrepreneurs to Israel as a place for business opportunities. The program is geared for college sophomores, juniors and select seniors. Participants are assigned an internship at a prominent global company in Israel where professional mentors guide them at work. Fellows are also paired with an Israeli student to acclimate them to Israeli society.

“The participants are 19- and 20-year-olds, and I am constantly impressed with how passionate they are. They want to have fun, but they are also so serious about what they want to do. They are not just looking for a good company, they are really looking for a company that does good,” said Ifat Bechor, Executive Director of Birthright Israel Excel. 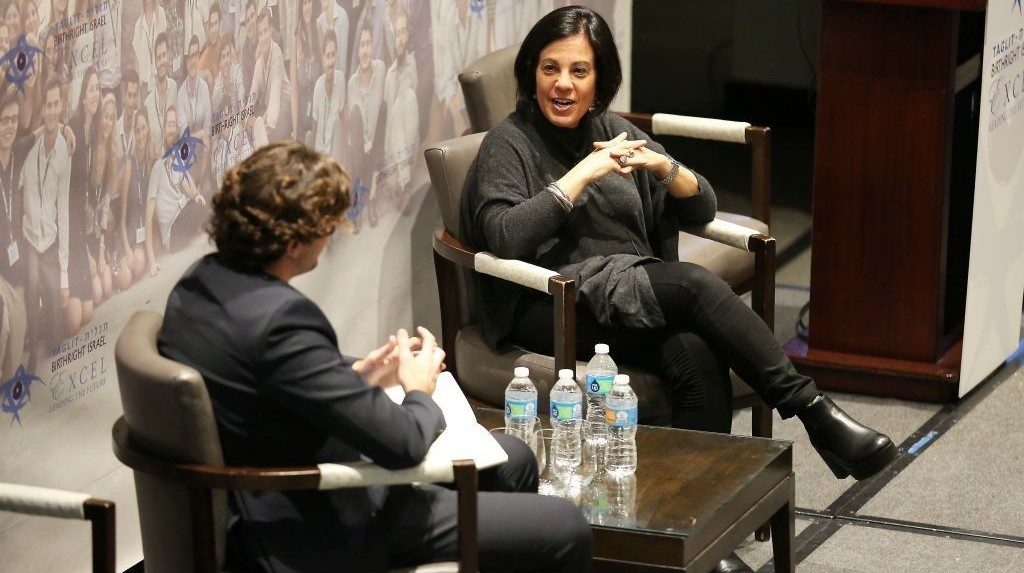 Since the program began in 2009 there have been 450 participants. Each summer the number of fellows breaks down to about 40% women and 60% men. The percentages reflect the ratio of women to men in US business schools, Bechor said.

“In terms of programs we encourage as many women as possible, especially in tech and finance where there are less women,” she said.

‘They are not just looking for a good company, they are really looking for a company that does good’
To that end, many young women were eager to hear Wilson speak about the risks and opportunities in early-stage investment as well as what it’s like navigating the business world as a woman.

After Wilson changed tracks from real estate to investing she decided to make women founders one of her criteria when weighing whether to invest in a business.

“It was always important to me to invest in women and minorities. When I started a decade ago, no one was investing in women and they felt they had no one to connect with,” she said, adding that there was, and is, a winning strategy in investing in what nobody else seems to see.

Her investments include Food52, Catchafire, Vengo, Nestio, Captureproof, Makers Row, Le Tote, and Little Borrowed Dress. She’s also invested in several real estate transactions, restaurants and education projects and served as chairperson at the non-profit Hot Bread Kitchen, which is dedicated to increasing access to the culinary industry for woman and minority entrepreneurs.

Aside from helping fellows hone their business skills, Birthright Excel also strives to deepen the ties participants from abroad feel toward Israel. One of the project’s aims is to enable fellows entering the business world to preserve the identity, heritage, and welfare of the Jewish community and improve the way the global business community views Israel.

Lofty goals to be sure, but ones Birthright Excel alumni Galit Krifcher and Lisa Wallace said attracted them to the program.

Krifcher, 23, who graduated from the University of Pennsylvania with a B.A. in economics, spent her 10-week fellowship working with Giza Venture Capital in Tel Aviv. Now an analyst at the Boston-based venture capital firm Battery Ventures, Krifcher credits Birthright Excel with helping shape her career trajectory.
“We often hear the term ‘Start Up Nation’ but I didn’t know exactly what that meant until I spent time there,” said the Potomac, MD native. “Spending so much time in Israel gives me a chance to explain why BDS is bad, and why non-Jews should care about Israel. It’s a formidable player in tech, it’s seen as a quality investment around the world.”

As for Wallace, spending time working with former Jerusalem mayor Nir Barkat gave her a chance to work in a mission-oriented environment. The Stanford University graduate now works at Qadium. Founded in 2012 with seed money from the Defense Advanced Research Projects Agency (DARPA), the San Francisco-based firm provides global internet sensing for the private and public sectors, including healthcare, defense and finance.

And while she and Krifcher said women clearly have made tremendous strides in business, it can still be an incredibly tough area to navigate.

“As Ruth Bader Ginsburg said in her new book, ‘It’s okay to be a little deaf sometimes.’ There are virtually no women in cyber-security so you just have to remember why you’re there and what your goals are,” Wallace said.

It’s a sentiment Krifcher shares. After all, she works in a sector where, according to Fortune, fewer than six percent of decision-makers at US venture capital firms are women. In the magazine’s April, 2016 study of the 906 decision-makers, only 52 were women.

“I go to industry events and there are maybe four or five women. I show up in a room and it’s unexpected I’m going to be there. Many of the men passively assume I’m in marketing, or that I’m someone’s secretary,” Krifcher said. “I like to say the learning curve isn’t a curve at all, but a vertical wall. Sometimes opening the door requires a bit of brute force.”