Israel on Display Each Day Through New Mobile App Israel365

Like many American rabbis who relocate to Israel on aliyah, Rabbi Naftali “Tuly” Weisz began to look for a way to make a difference in the Holy Land. The 30-something Modern Orthodox rabbi had already made some significant relationships with the Israel-loving Evangelical Christian community in his hometown of Columbus, Ohio.

Wanting to continue his outreach to the Evangelical Zionists, Rabbi Weisz decided to create a mobile app that brings the beauty and majesty of the Jewish homeland to their cellphones on a daily basis. So, he got to work on designing the right app that would be easy-to-use and attractive enough to look at daily. 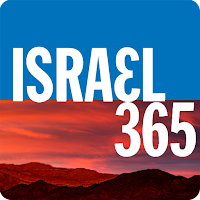 The app, called Israel365, features a stunning visual image of the Land of Israel from more than 30 award-winning Israeli photographers. Each day, the photo of Israel appears alongside an inspirational quotation from the Bible in English, Hebrew and with English transliteration. Each day also includes an interesting historical anecdote and Hebrew lesson based on the Biblical passage geared to the Evangelical Christian community, but of course available for download by any fan of Israel. As a digital app, the daily photos can be emailed or posted to Facebook with the simple tap of the screen and shared with friends.

Modeled after the traditional daily desk calendars with inspirational quotes each day, the mobile app is currently only available for the iPod, but an Android app is already in the works by Weisz. For individuals without an iPhone can currently sign up for a daily email message that brings Israel365’s daily content to their inbox. In addition to releasing the app on alternative mobile platforms, Weisz plans to add additional foreign language translations to the app. 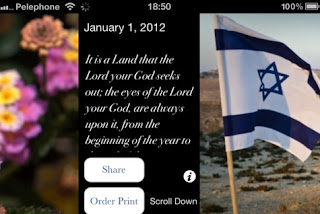 The Israel365 app was officially released on the first day of the new year by United with Israel, the world’s largest pro-Israel social community. United with Israel boasts nearly one million Israel supporters across the globe.Its founder Michael Gerbitz explained that the Israel365 app “will allow people to connect to the Land of Israel and its people on a daily basis.”

Weisz has spent the past several months creating the app and working with rabbinic colleagues and Evangelicals both within Israel and in the Diaspora to spread the word about the utility of the app. “Israel365 promotes the colorful beauty and significance of Israel instead of the conflict-ridden black and white landscape the traditional media emphasizes,” Weisz said. “Using innovative technology, the Israel365 app brings the diverse vibrancy of Israel to life in a modern and meaningful manner.”

No doubt that Weisz was already convinced of Israel’s beauty and deep connection to biblical history when he made aliyah with his family. Now, he’s sending the magic of the Holy Land to other lovers of Israel on a daily basis through mobile technology. Users can sign up for daily Israel scenes and inspiration at www.israel365.co.il or search the Apple App Store for “Israel365” to download the free iPhone app to connect with Israel each day of 2012.