How Sitting Shiva Has Changed

I’ve been thinking about death and mourning quite a bit lately. To begin with, the first week of the new year brought with it a rash of deaths here in the Detroit Jewish community. There were a fair share of elderly grandparents who died in their 80s and 90s during the first week of 2012, but that isn’t all that uncommon. Within a one-week period, however, there were tragic and untimely deaths in every age demographic ranging from a drug overdose to horrific traffic accidents to sudden massive heart attacks to the succumbing of long illnesses. There was a lot of mourning and a lot of grieving here in the Detroit Jewish community.

I’ve also been thinking about death and mourning because I’ve been working on an article for The Detroit Jewish News about the Shiva Connect website which helps mourners coordinate shiva following the death of a loved one. The research I’ve done on this website has pushed me to look closer at how Jews are observing shiva in the 21st century.

Author Bruce Feiler’s article in today’s NY Times was difficult to read because it makes me think that we should perhaps sit shiva for the traditional expression of Judaism’s mourning rituals which have been around for thousands of years. Feiler, the author of Walking the Bible, writes about observing a “secular shiva” for his friends who have died recently (or for his friends’ relatives). Rather than paying a condolence call to the home of the mourners, Feiler’s friends have gathered elsewhere and ordered pizza and a fruit salad and listened to eulogies by the grieving family. Bereft of prayers or the obligatory rites of Jewish mourning, Feiler finds this “secular shiva” to be a natural outgrowth of our busy, complicated lives without religion in the Digital Age. 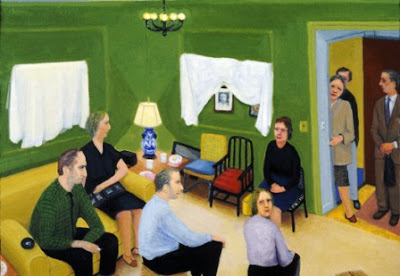 There is already a trend among non-Orthodox Jews to minimize the length of shiva. The Hebrew word “shiva” means seven and refers to the number of days the mourners are required to stay at home receiving visitors to pay their condolences. Traditionally, the only time that shiva isn’t the full seven days is when it is interrupted by a significant Jewish holiday during which time formal morning is prohibited. When I first became a rabbi eight years ago I would listen to families explain why sitting shiva for the full seven days seemed too arduous. I would then be able to convince them to do it even it meant a little bargaining such as keeping the final few days private without opening their home to everyone. These days, it has become commonplace for families to only “hold shiva” for a few days or at the very least a few hours following the funeral.

Feiler’s NY Times article is titled “Mourning in the Age of Facebook”, but it focuses less on social media sympathies and more on this New Age observance of shiva. (I wrote about mourning and the effect of social networking sites like Facebook in a blog post for The Jewish Week’s Jewish Techs blog in May 2010.) Feiler’s argument is that shiva is too difficult to take place at the home of the mourners. I’ve heard this argument before and agree with it on some levels. The last thing that many mourners want to think about after their loved one has died is opening their home to an unknown number of people including many strangers who are connected to the deceased through other mourners. Of course, the idea of shiva is that the mourners shouldn’t have to worry about making sure their house is clean for shiva or if there will be enough food or ample parking. That should be taken care of by their community of friends. But truthfully, it is still stressful time for mourners and is likely the leading cause of the desire to shorten the length of the traditional shiva period.

I recently spoke with the leader of a local Reform congregation who shared his vision of creating a physical space (not in the synagogue or funeral home) for mourners to gather for shiva. It would be designed to feel like a living room and friends would visit with the mourners there so no one had to open their home to countless people during the immediate week of grief. On the one hand this idea makes sense, but there’s a certain warmth that I believe would be missing. There’s a certain unique feeling about shiva in a mourner’s home. Traditionally the mourner shouldn’t have to leave home during shiva. That is why people come to the shiva house and daily prayer services are held there rather than in the synagogue.

The part of Feiler’s article I found most troubling was the notion that we’re just too busy these days to fully respond to death. Feiler quotes a hospice nurse who explains, “We’re just too busy in this world to deal with losing people.” I certainly hope that’s not the case. There is a reason that seven days of mourning were instituted. While death is never convenient, we are obligated to respond to it by taking time out of our busy, overextended schedules and comfort the mourners in their time of grief.

It is certainly more convenient to post a quick sentence or two of condolence on the mourner’s Facebook Wall, but that shouldn’t preclude us from performing the tradition acts of comforting the mourners as instituted by our faith. Judaism is fluid and progresses through the generations in response to the changing culture of the times and the needs of its practitioners, but we should be cautious in how much we change certain aspects of our tradition. Formal shiva serves a purpose and while it is not a convenient situation it guarantees the comfort of the community.

As Feiler notes, “Especially in a world in which so much communication happens online, the balming effect of a face-to-face gathering can feel even more magnified. The Jewish tradition of sitting shiva offers an appealing template.” Rather than seeing social media promote the loss of traditional shiva observance, I hope it is used to strengthen it. We are all busy with many distractions, but hopefully we’ll find ways to use modern technology to help our friends who are grieving. We should recognize the inherent value of traditional shiva rather than trying to reinvent it. I’m glad that Bruce Feiler found meaning in the “secular shivas” he observed for his friends, but I pray that we’ll return religion to its proper place in Jewish mourning ritual.

Read about the Shiva video game