From David Shamah at The Times of Israel:

When American troops are injured in the field, the first piece of life-saving medical equipment they may come into contact with nowadays is an Israeli-invented mini-sized manual ventilator. And not just American soldiers on the battlefield; the Pocket BVM has been used to treat thousands of people at the scene of numerous natural disasters, like in the huge earthquake that devastated Nepal earlier this year.

“The US Army decided that our Pocket BVM (bag valve mask device) would fit into combat scenarios much better than traditional BVMs,” said Dov Maisel, an American immigrant to Israel who invented the unique manual ventilator with his friend and fellow United Hatzalah volunteer Akiva Pollack. “It’s really taken off since the Americans adopted it last year, and now we are working with several NATO armies, first-aid groups in Europe and Asia, businesses, hospitals, and airlines among others.”

To that latter category add El Al, said Maisel; the Israeli airline several months ago signed a contract with MicroBVM, the commercial supplier of the device, and now all El Al planes have miniature BVMs scattered throughout their cabins, so that life-giving oxygen can be provided to a patient quickly and efficiently 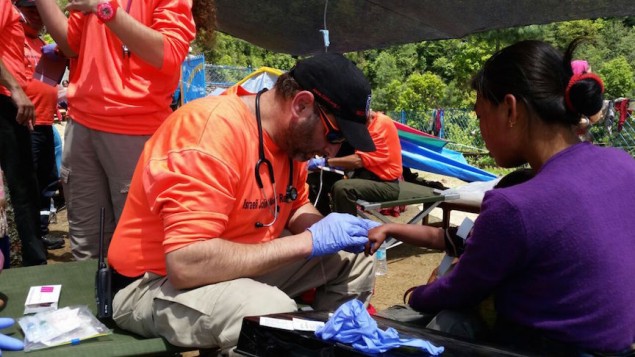 The story of the Pocket BVM is one of ingenuity, a drive for start-up success – and a “Jewish heart,” as Maisel puts it.

United Hatzalah is one of the premier rescue services in Israel, and works not only locally, but around the world. United Hatzalah volunteers have worked in Japan, Nepal, and many other places hit by recent natural disasters, and in 2013 the organization was nominated for consultative status as a United Nations NGO (non-governmental organization). “What’s unique about United Hatzalah is that it’s people from the community helping people,” said Maisel. “We’re not on the clock and we’re not on the payroll – all we do is try to help save lives.”

It was that desire to streamline the life-saving process that led Maisel and Pollack to dream up the Pocket BVM in 2004.

Traditional bag valve masks have been used since the early 1950s to manually pump oxygen into the lungs of individuals who are not breathing properly, or not breathing at all. A mask is attached to a patient’s face, and the first-aid worker forces air into the lungs, either manually (as is most common in rescue situations in the field) or with electric pumps. The flow of air into the lungs aims to help revive the patient or keep him or her alive while wounds or other issues are treated.

The problem with BVMs, said Maisel, is that they are just too big to schlep around in many scenarios.

“For soldiers in the field who have to carry all their supplies on their backs and stay alert for the enemy, carrying a rubber or plastic mask and a big balloon-like bag is going to be very difficult. It’s one thing if you can store it in a vehicle, but even if you can, the precious moments you spend running back to the vehicle, pulling out the BVM and bringing it to the patient and then hooking it up could be the critical few moments you need to save them.”

Maisel learned that lesson the hard way as a medic who was called to the scene of many tragedies during the Second Intifada.

“Each time we got called into the field, we had to gather up our intubation and array management,” he said. “We would get to the scene of a bombing or shooting attack and try to help the victims, spending precious seconds gathering up our ventilator equipment and moving from victim to victim.”

It was then that Maisel first thought about a portable, flexible, foldable, and storable BVM that could be collapsed to fit into a small circular case, popped up and ready for use within seconds. It made sense. Since BVMs were made of flexible material anyway, it would be a matter of just engineering in a little more flexibility to create a foldable version of the device.

Thus was born the Pocket BVM, which Maisel himself admits was “the next logical step” in the evolution of the device, created in Germany in 1953. As to why no one had thought of this before, Maisel admits that he was puzzled. “I actually couldn’t believe that this hadn’t been invented yet, but I checked the patents on these things very carefully, and I found that no one else had developed a system like this.”

With money from an angel investor, Maisel set to work on perfecting the system. He introduced it at the end of 2013, and throughout 2014, he showed off the device at medical conferences across the US, where an Army representative saw the Pocket BVM in action. The rest was history, he said.

Now with patents in 27 countries, Pocket BVM is a big hit with first-responders the world over.

As United Hatzalah’s international relations liaison, “I go to conferences and events around the world to show this off, and I get a lot of compliments.” said Maisel. “Once I went on a mission with an American rescue unit in Afghanistan, and they very proudly showed off their Pocket BVM – and nearly fainted when I told them I had invented it.”

With one life-saving device under his belt, Maisel said he is working on other devices that will make life easier for first-responders, enabling them to provide assistance more efficiently.

“This is not a business I am going to get rich off of,” said Maisel. “The market for this kind of equipment is large, but limited. The reason I am doing it is to ensure that we as first-responders can get help to as many people as possible, as quickly as possible. That’s what we try to do in United Hatzalah, so it works out for the best for everyone.”