↓ Skip to Main Content
Home › Jewish Techs Blog › Can We Have a Virtual Minyan With Skype?

Can We Have a Virtual Minyan With Skype?

It was 1998 and I was in my first semester of rabbinical school at the Jewish Theological Seminary. My Talmud professor, Rabbi Avram Israel Reisner, approached me after class one day to discuss a project he was working on. As a member of the Conservative Movement’s Law Committee, he was examining the acceptability of a virtual minyan (prayer quorum). Knowing my interest in technology, he picked my brain about some of the technical implications of video-conferencing. He sought to answer the halakhic (Jewish legal) question of whether a minyan could be convened using non-traditional, electronic means. Some of the sources he was considering were drawn from the same pages we were then studying in his class, namely Tractate Rosh Hashanah as it deals with hearing the sound of the shofar to fulfill the obligation.

Rabbi Reisner’s project resulted in a teshuva (legal position paper) titled “Wired to the Kadosh Baruch Hu,” in which he ruled that a virtual minyan conducted via video-conferencing was not “kosher.”

The full text of the teshuva is available online. I encourage you to read it, but I have summarized it below before making some comments on his conclusions. I hope to elicit some feedback about both Rabbi Reisner’s understanding of the “virtual minyan” and my commentary on his teshuva. 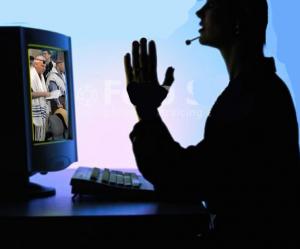 1. A minyan may not be constituted over the Internet, through an audio- or video-conference or any other medium of long distance communication. Only physical proximity, defined as being in the same room with the shaliah tzibbur (prayer leader), allows a quorum to be constituted.

2. Once a quorum has been duly constituted, those who hear the prayers being offered in that minyan may respond and fulfill their obligations thereby, even long distance. (The Law Committee is on record among those who would allow even the hearing of shofar in this way. This is a lenient position allowing those who live far away to fulfill obligations without being able to fulfill the mitzvah of being a physical part of a mitzvah. He cites precedence in the case of shofar.)

4. A clear hierarchy of preference is discernible here. It is preferable by far to attend a minyan, for the full social and communal effect, for which minyan was established, is only possible in that way. Less desirable, but closest to attendance at a minyan proper, is a real-time, two-way audio-video connection, wherein the individual, though unable to reach the other “minyannaires,” is able to converse with them and see and be seen by them. Only in rare or exigent circumstances should one enact the third, and least desirable, method of fulfilling one’s obligation by attaching oneself to a minyan through a one-way audio vehicle, essentially overhearing them as one standing outside the synagogue.

[This is a way of stating that there is a preference and that this type of a minyan l’chatchila (before the fact) is not preferred. Thus, in reference to Rabbi Reisner’s quote of Rabbi Jan Urbach, a former attorney, that professionals (like lawyers) will now opt out of going to synagogue to make the morning minyan and will rather just use a video wall at the office to save time is not what Rabbi Reisner is advocating. Individuals should make an effort to physically attend a real, halakhic minyan, but b’deiavad (after the fact), this is an option.]

5. With regard to Mourner’s Kaddish, a mourner at a distance may recite it, but must be accompanied by a physical participant (a member who is physically present) in the minyan. This preserves the reason behind requiring a minyan for the recitation of Mourner’s Kaddish. It establishes community. Without this concluding statement, individuals might take it a step further and recite Mourner’s Kaddish on their own.

Rabbi Reisner uses several Jewish legal proof texts, as well as “extra-halakhic” considerations (social, communal, technological, logistical, etc.), to arrive at his conclusion that virtual minyans just won’t cut it. It is difficult to be completely objective on this subject. It would seem to me that Rabbi Reisner very much wants individuals to be able to fulfill their obligations (especially regarding Mourner’s Kaddish). Additionally, in our hearts, we want those Jews who are physically unable to attend a minyan (homebound due to illness or other debilitating condition), to be able to fulfill their obligation with a community. If that community cannot be real/live, then we will look for alternatives using technology. Thus, our subjectivity plays a part in our decision making. This must be considered with regard to this teshuva as well.

As much as Rabbi Reisner wanted to put his seal of approval on virtual minyans to allow the homebound and the business travelers to be part of a prayer quorum to recite the Mourner’s Kaddish, the technology of the day could not meet the Jewish legal standards. But this was over a decade ago. While the Jewish legal tradition has traveled on a steady course in that time, modern technology certainly hasn’t. Advances in virtual communication, bandwidth, video capabilities, and social media may make the virtual minyan possible.

How might today’s technology comply with the legal constrictions and allow for Jewish people to gather together virtually to form a minyan?